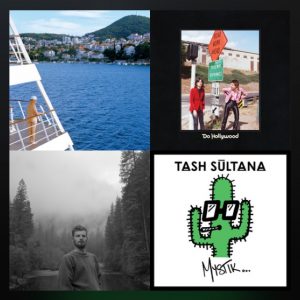 Jimmy Eat World Bleed American is a very memorable album for me because in 2002 my family was in the midst of moving from Virginia to Maryland and that entire summer was spent in New York living with my cousins, riding dirt bikes, taking trips to Manhattan, and catching bullfrogs by the swamp, all while a sense of wonder and excitement hovered in the air around me, wondering what the next chapter in our lives held when it would all come to an end. An unlikely soundtrack, and this album sticks out like a sore thumb in terms of my personal taste these days, but A Praise Chorus was always the song that stuck out them most to me.

Calpurnia is the band of young actor Finn Wolfhard, who you may know as Mike Wheeler in Stranger Things or Richie Tozier in Stephen King’s It remake. If not, I’m sure you’ll see him everywhere this year, possibly on tour! The band takes influence from acts such as Twin Peaks, Kurt Vile, and Finn has even been seen onstage with Mac Demarco

Photay 2017 album Onism was one of my favorite releases last year. Keep your eyes on Photay, I think he could be one of the big name producers in the next few years. He recently lent his music to and scored an episode of Broad City

Check out the Spotify playlist for this week’s show!

I just finished watching this one. I won’t give

Happy National Coffee Day to those that celebrate.

News from Consequence of Sound