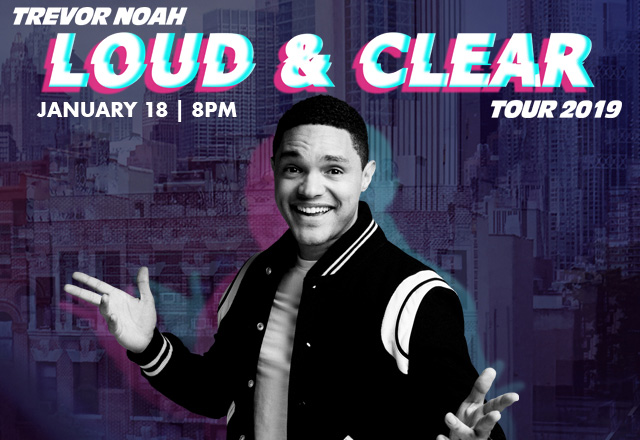 Trevor Noah is crossing North America on his first ever arena outing with the Loud & Clear Tour 2019. Kicking off January 11 in Toronto, the 28-city tour will visit cities including Norfolk, Virginia at the Constant Convocation Center on Friday, January 18. The Daily Show host and celebrated comedian is known around the world for his insightful and authentic take on politics and current events. Born in South Africa during the end of apartheid, he often shares incisive social and political commentary on his Comedy Central The Daily Show platform and through his various stand-up specials and writing. In 2016, Trevor released his first book Born a Crime: Stories from a South African Childhood, which became an instant New York Times bestseller.

Tickets will go on sale to the general public starting Friday, October 19 at 10am at LiveNation.com, YnotTix.com, by calling 877‐YNOT‐TIX, or by visiting the Constant Center Box Office.” Citi is the official presale credit card for the Loud & Clear tour. As such, Citi card members will have access to purchase presale tickets for Live Nation dates beginning Wednesday, October 17 at 10:00am until Thursday, October 18 at 10:00pm through Citi’s Private Pass program. For complete presale details visit www.citiprivatepass.com.