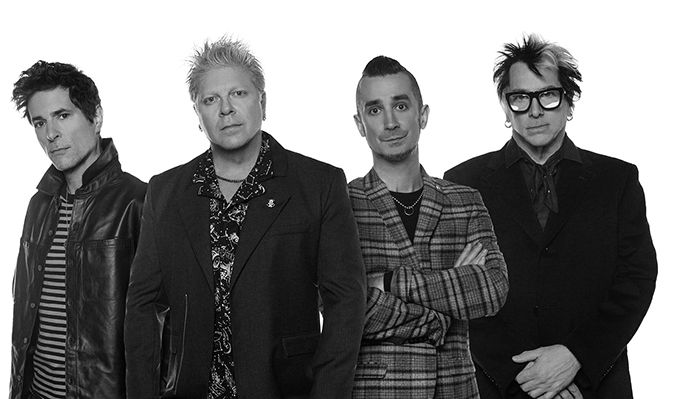 1984-1991
Following a riot at a 1984 Social Distortion show, high school buddies Dexter Holland and Greg K decide to start a band of their own, later to become The Offspring, in Garden Grove, California. The band eventually release a few 7-inch singles and then their first full-length effort, THE OFFSPRING, in 1989.

1992-1993
In 1992, punk indie pacesetter Epitaph Records, home of NOFX, Pennywise and Rancid, sign The Offspring and release their second album, IGNITION.  The band hit the road alongside their label-mates playing to packed bars, clubs and even Elks Lodges as a surging local punk scene grows into a national movement.

1994-1995
In 1994, The third wave of punk rock breaks in America. A quirky song with a Middle-Eastern guitar line seeps onto the airwaves. “Come Out And Play” from the album SMASH is that song, The Offspring have arrived.  While the band’s video is a MTV buzz clip, guitarist Noodles still works as a school janitor for the great health coverage.  After students start recognizing him at school and tour offers continue to pile up, he is soon finally convinced to leave the job.  Also conceding to the developing momentum, Dexter puts his PHD studies at USC on hiatus.  Along with Green Day and Rancid, The Offspring see the attention of the nation swing to local punk bands with a knack for delivering a good hook with bruising energy.  Epitaph can barely keep up with demand as SMASH becomes a phenomenon and goes on to sell 11 million copies – the most ever for a band on an indie. Dexter and Greg K start Nitro Records. The Huntington Beach-based label forms a roster that includes such California stalwarts as the Vandals, AFI, Guttermouth and others. Nitro also reissues the band’s self-titled debut on CD for the first time.  The Offspring head out on their first world tour including stops at the Glastonbury festival in England, the Big Day Out festival in Australia and headlining US tours.  At home and to the rest of the world, The Offspring become a pillar of American rock.

1996
On the heels of SMASH’s success, the band attempt to negotiate a long term deal with Epitaph.  Negotiations break down and fearful their contract will be sold to a major label like Nine Inch Nails’ was, The Offspring make the first move. The band sever ties with Epitaph and sign to Columbia Records.  The indie community grumbles.

1997
Ixnay On The Hombre is released in 1997 spawning the hits “All I Want” and “Gone Away”.  The video for “I Choose” marks Dexter’s directorial debut.  Sales dip to “only” 3 MILLION.  The Offspring begin another world tour with a return to Australia to headline the Big Day Out festival.

1998-1999
The band soon follow up with AMERICANA.  Amid the wild west-like rise of mp3 downloads and file-sharing websites, major label heads are firmly planted in the sand while the band take a more progressive approach.  First showing support and then striking deals with the early mp3 file sharing networks to promote the new album. The lead single, Pretty Fly (For A White Guy) is downloaded a record 22 million times earning the #1 spot on Rolling Stone’s first ever Top Pirated Internet Songs Chart as AMERICANA goes on to sell 11 Million copies.  The band then file an amicus brief in support of file-sharing service Napster in their case vs. the RIAA.  The record industry grumbles. The press raves: “Other bands and labels can wait, but the Offspring want to stake out territory on the Net while the opportunities seem richest.”  Another world tour ensues with a return to headlining England’s Reading Festival and the band’s first ever arena/amphitheater tour.

2000-2002
Predating Radiohead by 7 years, The Offspring spawn more controversy when they decide to offer their 2000 album, CONSPIRACY OF ONE, free of charge in mp3 format via offspring.com prior to its initial release. Offspring fans downloading the record are automatically registered in a contest to be awarded $1,000,000 of the band’s own money live on MTV on the day of the album’s release. Sony Music grumbles.  In a settlement reached on the courthouse steps with Sony Music, the free download is limited to just the single “Original Prankster.”  After having single-handedly destroyed the music industry, the band sarcastically turn the tables and are hit with a cease-and-desist order after offering Napster logo T-shirts for sale on the band’s own website. The band defend their actions, claiming they were simply “sharing” the Napster logo with fans.  Napster grumbles.  The band returns to US arenas before heading to Europe and headlining slots at Japan’s Summersonic Festival, UK’s Reading and Leeds festivals and KROQ’s Inland Invasion.  After years of supporting underground skate and surf videos, the band release their own entitled HUCK IT and join Tony Hawk on tour with his Boom Boom Huck Jam action sports show.

2003-2004
In 2003, the band jokingly steal Guns N’ Roses’ “Chinese Democracy” album title for their own upcoming album. Axl grumbles. The band release the album re-titled SPLINTER. The first single, “Hit That,” tops the modern rock charts – 10 years after the band’s first #1.  The Offspring embark on yet another world tour, once again headlining Reading and Leeds, returning to South America and playing their first shows in South Africa.

2005
The GREATEST HITS collection follows in 2005 along with the band’s first ever Warped Tour appearance and a benefit show for the famed C.B.G.B.’s club in New York City.

2007-2008
The Offspring record Rise And Fall, Rage And Grace with producer Bob Rock. The first single, “Hammerhead,” debuts May 5, 2008 as a free download on offspring.com. “Hammerhead” goes on to be a top 10 hit at Alternative and Active Rock radio stations, holding the #2 spot on the Alternative radio chart for 6 weeks – reigning 14 weeks total in the top 10.

After a surprise early release of the digital album, Rise And Fall, Rage And Grace is released worldwide in mid-June 2008 on CD and gatefold vinyl. The album debuts in the top 10 on the US and UK sales charts, #1 in Japan and #3 in Australia.  The initial tour in support of the album includes festival stops across the US and Europe including headlining slots at the KROQ Weenie Roast (Los Angeles), Download Festival (UK), Bumbershoot (Seattle), Rock Am Ring/Rock Im Park (Germany) and the Virgin Mobile Festival (Baltimore/DC).  By the end of Fall 2008, the second single, “You’re Gonna Go Far, Kid,” out paces the success of “Hammerhead” as it climbs up the Alternative and Active Rock charts. The song spending 11 straight weeks a #1 on the Alternative chart.

2009
“Kristy, Are You Doing Okay?” is the 3rd single from Rise And Fall, Rage And Grace, starting 2009 as the #9 song at Alternative radio and climbing the Top 40 charts.  In March, The Offspring announce their first full North American tour in nearly 4 years.  The announcement comes via the band’s “Shit Is Fucked Up” tour widget featuring a mock “presidential address”  by Dexter Holland. Alkaline Trio, Pennywise, Dropkick Murphys, Sum 41 and Shiny Toy Guys support on select legs of the tour.

2010
The band return to their Huntington Beach, CA studio to work on new songs with producer Bob Rock.  In Summer, The Offspring and 311 tour together for the first time ever – co-headlining the Unity Tour 2010; an 18 date run of US amphitheaters.