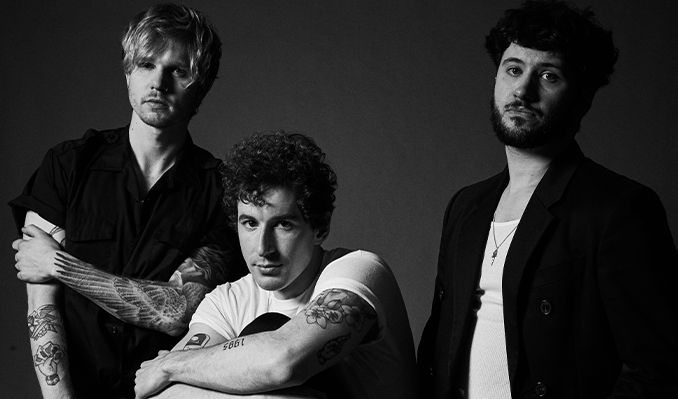 After more than five years as a band, The Band Camino have never felt more confident in their music. Now, they have a self-titled album to prove it.  The Band Camino, due Sept. 10 on dblblk/Elektra Records, expands on the guitar-driven pop that the group introduced with their anthemic debut EP tryhard in 2019. The pop-rock three-piece (singers/guitarists Jeffery Jordan and Spencer Stewart, and drummer Garrison Burgess) have been honing their dynamic Band Camino sound since relocating from Memphis to Nashville in 2018. It was a fateful move for founding members Jeffery and Spencer, college buddies-turned-bandmates who were in search of a drummer and recruited Garrison upon arriving in Music City.

“As soon as we played the first show together, we knew we hit it off,” Jeffery recalls. Garrison agrees: “There was this instant chemistry, and everybody on the team could feel it. Everybody’s very appreciative of each other and what they bring to the table. It was cool to be part of something that was growing and was bigger than me, and bigger than each of them. It was magic.”

That magic has seemingly been evident to fans, too. The Band Camino completely sold out their 2018 and 2019 headlining tours, as well as their biggest headlining show to date at Nashville’s Ryman Auditorium in September 2021 — the latter of which sold out in 10 minutes. But the group has clearly made an impact since their start, garnerning 2.6 million monthly Spotify listeners and more than 330 million global streams to date. Their growth has been largely stimulated by raw discovery, even catching the attention of Taylor Swift, who included the band’s reflective song “Berenstein” on her “Songs I’m Loving Right Now” playlist in 2018.

Garrison’s addition came at a pivotal time for The Band Camino creatively, as 2018 was also the beginning of their partnerships with Nashville superproducer Jordan Schmidt and singer-songwriter Seth Ennis. “That was a big season of when everything changed,” Jeffery says, calling tryhard’s roaring lead single, “Daphne Blue,” the “turning point” for the band. “Right after we wrote it, we were like, ‘We have something different here, and this kind of defines where we’re headed.’” Echoes Spencer, “It gave us a different vision of what we could be.”

“Daphne Blue” took the group’s production from lo-fi to stadium-ready, ramping up their electric guitars and drums, and letting their powerful vocals soar. That amplified sound reaches new heights on The Band Camino, a 14-track showcase of the group’s multifaceted soundscape that features ‘80s synths in punchy tunes such as “I Think I Like You,” arena-rock anthems including rollicking single “1 Last Cigarette,” and heartfelt moments like the introspective “Who Do You Think You Are.” The trio recorded the entire album over a month-long stay at the iconic Sonic Ranch in Tornillo, Texas, where they, as Jeffery puts it, “rode this wave of creativity” alongside Jordan Schmidt and executive producer Jameson Roper last fall. All but two of the songs are the result of the band’s unexpected downtime during quarantine in 2020, when Garrison says their songwriting “went into overdrive.”

The guys’ resounding favorite is “Underneath My Skin,” a spirited tale of dysfunctional love. Yet, they all agree that the two most Band Camino-esque tracks are “Roses” and “Look Up” because of their “don’t take life for granted” sentiments. Spencer asserts that sharing a meaningful message has always been one of the most important facets of The Band Camino’s music, even when it comes in a more somber form like the album’s goosebump-inducing breakup ballad “Help Me Get Over You.” Outside of that track and the acoustic confessional “Sorry Mom,” the rest of the new material masks any melancholy lyrics with infectious melodies and upbeat vibes, immediately evidenced on the album’s bluntly titled kickoff “Everybody Dies.”

The Band Camino’s juxtaposing creative approach has become even more effective as their sound has elevated, with one constant carrying throughout their entire catalog: relatability. “Art feels like it’s a reflection of society, emotions, and relationships, and it’s supposed to make you feel understood. With the songs we wrote, we hope we can continue to make people feel understood and that you’re not alone in whatever you feel,” Jeffery says, excitedly adding, “and that bands are back, baby!”

Jeffery, Spencer, and Garrison are eager to usher in a new wave of bands in today’s solo act-dominated pop world. “We want to make music for the people who listen to everything. We want people to be able to listen to Justin Bieber and then listen to The Band Camino back-to-back,” Jeffery declares. With that goal in mind, the band promises to continue pushing boundaries as the rock band of the pop generation. “We’ve always just wanted to make music that we would want to listen to,” Jeffery says.

“I hope that we’re around long enough to get made fun of,” Spencer adds with a laugh. “and that we’re so popular that one day people hate us because we’ve been around for so long.”

With an opening slot on Dan + Shay’s 2021 U.S. Tour and an impactful album in their future, The Band Camino are certainly on their way to long-term success. According to Jeffery, he and his bandmates are more than primed for that: “We’re ready to keep doing this forever.”