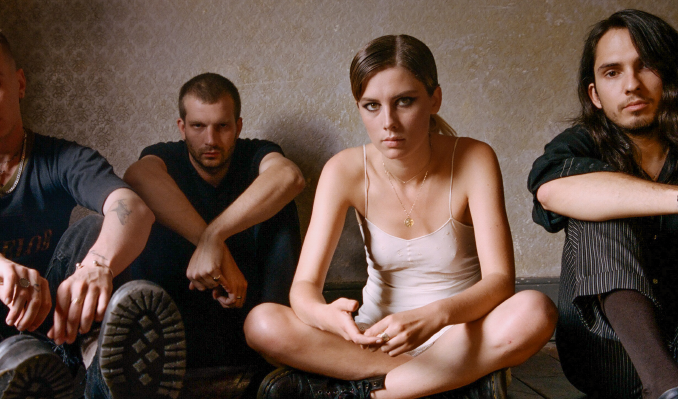 In order for art to honestly reflect life, the mirror should be multi-dimensional. That’s the way the looking glass works for Wolf Alice.

“You go through every single day feeling different things all the time,” asserts vocalist and guitarist Ellie Rowsell. “So, if an album reflects life, shouldn’t it mirror all of those extremes? If you read a collection of short stories, you don’t want them to be simply about the same people or topics. You want to follow sadness with happiness to feel better. It should be the same for music.”

That’s a mindset she shares with her bandmates Joff Oddie [guitar], Joel Amey [drums], and Theo Ellis [bass]. The group’s multi-page musical palette embraces everything from ethereal electronics and lithe, lush melodies to buzzing distortion and towering feedback, reaching from the heart to the heavens. It’s a striking sonic patchwork that’s quickly established the London quartet as a vibrant voice.

Back home, they achieved Best Breakthrough Artists at the UK Festival Awards, landed on the coveted “long list” for BBC Sound of 2015, were pegged as one of iTunes’ “Artists For 2014,” and reached “#4 most blogged artist on Hype Machine” in the same year. Stateside, in addition to selling out their first 2015 shows in L.A. and New York, early support arrived with enthusiasm fromKCRW, The Fader, and Billboard who dubbed them an “Artist to Watch” for 2015.

However, the band’s full-length debut, My Love Is Cool [Dirty Hit/RCA Records], formally opens up the Wolf Alice world.

“When we first met, all of us were doing different musical things, but they were nothing like this band,” explains Joel. “We all wanted to do something like this. It wasn’t anything we ever overtly discussed though. It came out quite organically by working on each song individually. We ran with whatever excited us.”

In order to capture that excitement, the group tapped the talents of producer Mike Crossey [Arctic Monkeys, Foals, Black Keys] at Livingston Recording Studios in the Wood Green area of North London. Surrounded by the old decaying buildings, the musicians dove headfirst into properly communicating their musical vision over the course of just thirty days.

“We had a pretty good idea of what we wanted,” admits Ellie. “We weren’t looking for a producer to tell us what to do, but a producer who could draw out the ideas we already had and contribute experience and knowledge in different areas. Mike was perfect for that. He’s been doing it a long time, has worked with many guitar bands, and possesses this almost scientific knowledge of how to achieve sound.”

As a result, the first single “Moaning Lisa Smile,” which enjoyed a high-profile sync on HBO’s The Leftovers, climaxes on a dramatic guitar hum and hypnotic refrain. “It’s got this almost metal riff,” laughs Ellie. “It’s funny because we all love The Simpsons and we based it on Lisa Simpson.”

Songs like “Bros” temper divine harmonies with cinematic guitars and bristling textures. The youthful energy transfers to the lyrics which Ellie describes as a story of “being a kid and hanging out with your friends.”

The spacey fuzz of “Giant Peach” evokes shoegaze elegance before veering into a driving stomp. She continues, “That’s an amalgamation of loads of ideas we had. It’s long and jamming, and it’s loosely based on living in the same place your whole life and your love-hate relationship with that.”

“The songs are like these mini stories,” adds Joel. “They really paint a picture of various phases and moments, never repeating. That was important to us.” Not surprisingly, Wolf Alice’s moniker comes right from the pages of an Angela Carter short story from the collection The Bloody Chamber.

Ellie goes on, “She writes these dark, twisted adult fairytales. The story was a coming-of-age piece about a girl who was raised by wolves. I liked the contrast. Upon reflection, it subconsciously makes sense that we chose that name as the sound is its own juxtaposition.” Ultimately, that push-and-pull makes Wolf Alice the wonderful enigma that they are.

“I have a quite romantic idea for the album in my head,” smiles Joel. “I’d love for it to inspire somebody to pick up an instrument and be around long after we fade away.”

“It’s the same for me really,” agrees Ellie. “I like the idea that you can’t pin it down. If you can’t describe something, it’s doing something to you.”