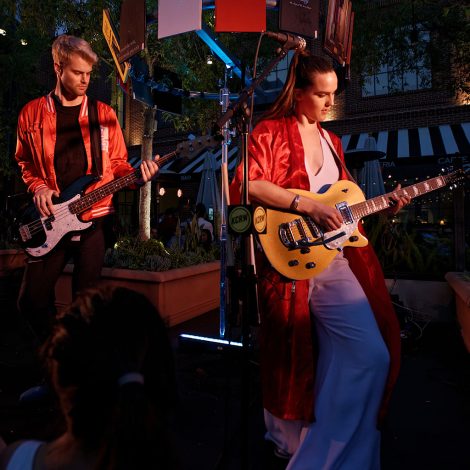 Sofi Tukker is a New York-based musical duo consisting of Sophie Hawley-Weld and Tucker Halpern. The band is perhaps best known for its song “Best Friend,” which was featured in a commercial during Apple’s unveiling of the iPhone X on September 12, 2017.

Sofi Tukker released an EP, Soft Animals on July 8, 2016. The EP includes “Drinkee”, “Matadora”, “Awoo”, Déjà Vu Affair, Moon Tattoo and “Hey Lion”. The title comes from a Mary Oliver poem (“You only have to let the soft animal of your body love what it loves”).

Their song “Johny” is featured in EA Sports’ FIFA 17, and was adapted from a poem by Brazilian poet Paulo Leminski.

Their 2017 song, “Best Friend” was played during the iPhone X full commercial reveal at the Apple Event on September 12, 2017. It is also included in the football game FIFA 18, the second straight year that a song of theirs has been included on the soundtrack of FIFA.

Their song “That’s It (I’m Crazy)” featured in a TV commercial for Apple promoting their special edition iPhone 8 RED smartphone in 2018.