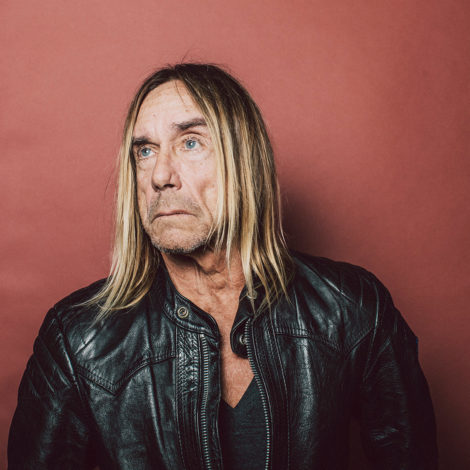 James Newell Osterberg Jr. (born April 21, 1947), better known as Iggy Pop, is an American singer, songwriter, musician, record producer, and actor. Designated the “Godfather of Punk”, he was the vocalist of influential proto-punk band the Stooges, who were formed in 1967 and have disbanded and reunited multiple times since.

Initially playing a raw, primitive style of rock and roll (that progressed stylistically with each album), the band sold few records in their original incarnation and gained a reputation for their confrontational performances, which often involved acts of self-mutilation by Pop. He famously had a colourful and often influential friendship and collaboration with David Bowie over the course of his career, beginning with the Stooges’ album Raw Power in 1973. With both musicians having relocated to West Berlin to wean themselves off their respective drug addictions, Pop began his solo career by collaborating with Bowie on the 1977 albums The Idiot and Lust for Life. Throughout his career, Pop is well known for his outrageous and unpredictable stage antics and distinctive voice. He was one of the first performers to do a stage-dive and popularized the activity. Pop, who traditionally (but not exclusively) performs bare-chested, also performed such stage theatrics as rolling around in broken glass and exposing himself to the crowd.

Pop’s music has encompassed a number of styles over the course of his career, including garage rock, punk rock, hard rock, art rock, new wave, jazz, blues, and electronic. Though his popularity has fluctuated through the years, many of Pop’s songs have become well known, including “Search and Destroy” and “I Wanna Be Your Dog” by the Stooges, and his solo hits “Lust for Life”, “The Passenger” and “Real Wild Child (Wild One)”. In 1990, he recorded his first and only Top 40 U.S. hit, “Candy”, a duet with B-52’s singer Kate Pierson.

Although Pop has had limited commercial success, he has remained a significant influence on a wide range of musicians in numerous genres. The Stooges’ album Raw Power has proved an influence on artists such as Sex Pistols, the Smiths, the Sisters of Mercy, Red Hot Chili Peppers, and Nirvana. His solo album The Idiot has been cited as a major influence on a number of post-punk, electronic and industrial artists including Depeche Mode, Nine Inch Nails and Joy Division, and was described by Siouxsie Sioux as a “re-affirmation that our suspicions were true: the man is a genius. He was inducted as part of the Stooges into the Rock and Roll Hall of Fame in 2010.