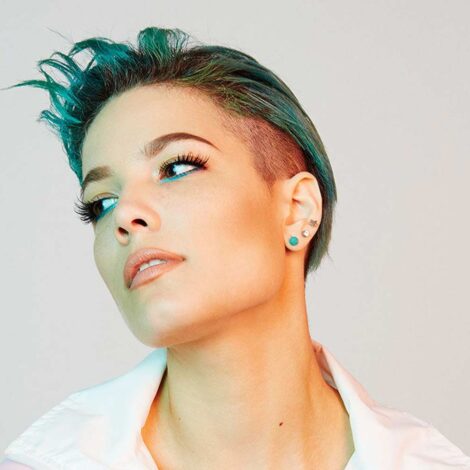 Halsey released her debut studio album, Badlands, in 2015. It was certified Double Platinum by the RIAA, as were its tracks “Colors” and “Gasoline”. In 2016, she was featured on the Chainsmokers’ single “Closer”, which topped the charts in over 10 countries. Her second studio album, Hopeless Fountain Kingdom (2017), consisted of more “radio-friendly” music than her previous releases; its singles “Now or Never” and “Bad at Love” reached the top 20 of the Billboard Hot 100, with the former peaking in the top five. Halsey’s third studio album, Manic (2020), became her best selling album worldwide, while its lead single “Without Me” became her most successful single as a lead artist. Her fourth studio album, If I Can’t Have Love, I Want Power (2021), moved away from her previous sound in favor of a darker industrial sound; described by Halsey as “the album [she] always wanted to make”, it was produced by Nine Inch Nails members Trent Reznor and Atticus Ross and received generally positive reviews.

In 2020, Billboard reported that Halsey has sold over 1 million albums and received over 6 billion streams in the United States. She is noted for her distinctive singing voice. Her awards and nominations include four Billboard Music Awards, one American Music Award, one GLAAD Media Award, an MTV Video Music Award, two Grammy Awards, and being named Songwriter of the year by BMI Film & TV Awards in 2021. She was also included on Time magazine’s annual list of the 100 most influential people in the world in 2020. Aside from music, she has been involved in suicide prevention awareness, sexual assault victim advocacy, and racial justice protests.