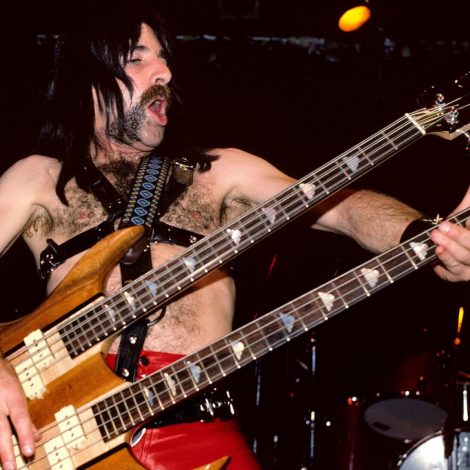 Derek Albion Smalls is a fictional character played by Harry Shearer in the spoof rockumentary This is Spinal Tap. He is the bassist for mock British heavy metal group Spinal Tap, playing alongside guitarists Nigel Tufnel (Christopher Guest) and David St. Hubbins(Michael McKean), as well as with a plethora of drummers and keyboardists.

Derek grew up in Nilford-on-Null in the West Midlands, England, where his father, Donald “Duff” Smalls, ran a telephone sanitisation business, “Sani-Fone”. He joined Spın̈al Tap in 1967 after the departure of bassist Ronnie Pudding.

Derek has described bandmates David St. Hubbins and Nigel Tufnel as “distinct types of visionaries … like fire and ice”, saying that he considered his role in the band to be “in the middle of that, kind of like lukewarm water”. A pipe-smoker, he has been known to enhance his appearance by placing a foil-wrapped courgette in his trousers, which resulted in an embarrassing incident passing through a metal detector at Chicago’s O’Hare International Airport during 1982’s “Tap Into America” tour.

Smalls played killer #1 in Marco Zamboni’s Roma ’79, and is the star of a series of comical Belgian television commercials for the snack food Floop. He is also a prize-winning gardener, having developed and patented a totally black rose, the Death by Midnight. He released a solo album, It’s a Smalls World, in the mid 1970s, and also played in the Christian rock band Lambsblood in the late 1980s before rejoining Spinal Tap for their reunion tour in 1992. During this period, he also worked briefly for his father’s business. After the band broke up in 1992, Derek became employed as a “floater” in an elementary school, with such duties as crossing guard and straightening library books. According to the 2007 short film Spinal Tap, it is revealed that Derek checked into rehab to be treated for an addiction to the internet.

A solo album, Smalls Change (Meditations Upon Ageing), was announced in early 2018, including collaborations from many prominent rock musicians.