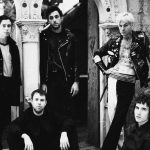 The Neighbourhood is the self-titled third studio album by American alternative band The Neighbourhood. It was released on March 9, 2018 by Columbia Records. It was preceded by two EPs, Hard which was released on September 22, 2017 and To Imagine, released on January 12, 2018. The tracks from the extended plays that were not finally included on the album were compiled in another EP called Hard to Imagine. These tracks were also released in an additional disc on the digital deluxe edition of the album.