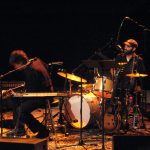 The Deconstruction is a 2018 album by Eels, scheduled for release on April 6, 2018. The band’s twelfth studio release follows a four-year period where front man E took a hiatus from music. The album has garnered favorable reviews.

The Deconstruction is the first Eels studio album in four years; frontman E was burnt out after touring and recording with the band’s previous releases and considered retiring from music. In the interim, he made a few public performances, acted in the Netflix original series Love, and went through a divorce, remarriage, and the birth of a son. Lyrically, the album focuses on compassion and kindness.