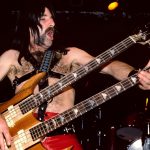 There have been hints of something afoot with Smalls dating back to last May when drum legends Chad Smith, Dave Grohl and Jim Keltner were hanging out at EastWest Studio, with Smith teasing Smalls was involved as well. In the time since, it was revealed that Smalls had a guest list that included Steely Dan’s Donald Fagen, Peter Frampton and Steve Vai. Now we finally have a full album announcement with Small Changes (Meditations Upon Ageing) due April 13 via Twanky Records / BMG.

The musician will also be heading out on the “Lukewarm Water Live: An Adventure in Loud Music” trek starting April 14 in New Orleans. One quick look at the track listing and you’ll notice frequent usage of the Hungarian Studio Orchestra. Smalls is planning to incorporate local orchestras during a number of stops, including those June 29 in Atlanta and a still to be determined date with the National Symphony Orchestra at the Kennedy Center in Washington, D.C. Stay tuned for a tour announcement.