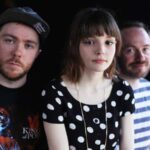 Screen Violence is the fourth studio album by Scottish synth-pop band Chvrches. It was released on 27 August 2021 through EMI Records in the UK and Glassnote Records in the US. Lead single “He Said She Said” was released on 19 April. The album was announced alongside the second single, “How Not to Drown”, a collaboration with Robert Smith, lead singer of the Cure.

Screen Violence will be promoted with a North American tour, to be held from November to December 2021.

More Albums From This label:
Glassnote