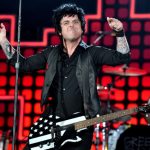 Love if for Losers -

Where Green Day wear their punk influence proudly, The Longshot seems more of a straight-up, pop-inspired rock outfit with even a little classic rock and country flavoring working its way in on certain tracks.

Armstrong is joined in the band by Prima Donna band members Kevin Preston and David S. Field, as well Green Day’s touring guitarist Jeff Matika. Prima Donna have had a close association with Green Day over the years, and Preston had previously played in another Green Day offshoot, Foxboro Hot Tubs.

More Albums From This label:

Sorry, No Results Audio For Label.