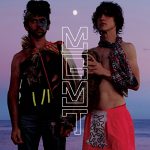 Little Dark Age is the fourth album by the American rock band MGMT, which was released on February 9, 2018 by Columbia Records.

Little Dark Age received mostly positive reviews from music critics. At Metacritic, which assigns a normalized rating out of 100 to reviews from mainstream critics, the album has an average score of 77 based on 20 reviews, indicating “generally favorable reviews,” and is also the most critically acclaimed album by MGMT on this platform. Writing for NME, Jordan Bassett considered the album to be a return to form for the band after their previous two albums, noting that “if there were a time for an about-return, it was that third record. They’d enjoyed their foray into experimentation, and a self-titled album often indicates a band that’s come back into focus. Here, though, we’re treated to an overdue loop back to pop hookiness.” Bassett also went on to commend the band’s return to pop as a “welcome surprise”. Terence Cawley of The Boston Globe expressed a similar view, asserting that the album was “both hooky and eccentric enough to please MGMT fans of all stripes.” The Washington Post’s Mark Kennedy gave a positive review, stating that “MGMT have once more delivered an off-kilter, challenging and very addictive album.”