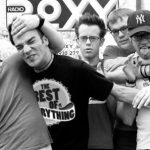 The Get Up Kids

In the second half of the 1990s, the Get Up Kids fostered a thriving DIY punk scene in a landlocked college town, knocked out their debut in a weekend with Bob Weston of Shellac, and turned down major-label offers. Put aside the love songs, and their classic Something to Write Home About can be read as a concept album about the pressure of seeing then-fledgling indie label Vagrant literally bet the farm on their success. But they also wrote concisely and passionately about girls, heartbreak, and trouble with authority, thus setting the norms for 21st-century emo: While the band’s presentation and ethics were overtly punk, their songs harkened back to early rock’n’roll records that functioned as teen pop.

The seven years since the Get Up Kids released their first reunion album, 2011’s There Are Rules, however, have seen the rise of the apparently oxymoronic subgenre “adult emo.” Now in their late 30s and early 40s, bands like Braid, American Football, Brand New, Jimmy Eat World, and Taking Back Sunday are maturing, often with vital results. And that same “adult emo” outlook makes Kicker the most satisfying Get Up Kids release in nearly 20 years.

“We’ve been playing with this idea about how you can translate the ‘emo themes’… into feelings that are relevant to being an adult,” frontman Matt Pryor recently explained. This wasn’t always an option: Many emo acts were brutalized by the early 2000s. The commercial breakthroughs of Jimmy Eat World and Dashboard Confessional, as well as their own drive to transcend their genre tag, led bands drastically change their sounds. Maybe because their name included the word “kids,” the Get Up Kids had it the worst. Produced by R.E.M. mainstay Scott Litt, their 2002 album On a Wire rebranded the band with acoustic ballads and mid-tempo moodiness. Scorned by fans for not sounding enough like “Coming Clean,” the record was mocked by critics because it still sounded like the Get Up Kids. 2004’s similarly mellow Guilt Show failed to change that narrative. Seven years later, after breaking up and reuniting, they released There Are Rules, a competent indie-rock record made in relative anonymity.