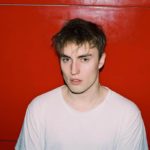 Hypersonic Missiles is the debut studio album by English musician, Sam Fender. The album was released on 13 September 2019 through Polydor Records. The album includes the singles “Play God”, “Leave Fast”, “Dead Boys”, “That Sound”, “Hypersonic Missiles”, “Will We Talk?” and “The Borders”.

Sam Fender grew up in North Shields in Newcastle upon Tyne.[10] He started obsessing over Bruce Springsteen albums after his brother introduced him to the albums “Darkness on the Edge of Town” and “Born to Run”. At the age of 13 he began to write his own music inspired by Springsteen as well as Oasis and Joni Mitchell.[11] He started to perform open mic nights with his brother where he would cover Jimi Hendrix songs as well as noughties indie rock songs. After he turned 18 he began performing paid gigs at restaurants[12] In 2010 he was spotted performing by Ben Howard’s manager who quickly took him on as a client. Following brief acting roles on the shows Vera and Wolfblood, Fender released his debut single Play God.[13]

Seven singles were released as stand-alone singles and singles from Fender’s extended play, Dead Boys, which are included on the main studio album. The first single, “Play God” was released on 30 March 2017, but re-released on 23 January 2019 in anticipation of the album. “Play God” was Fender’s first single to chart, reached number 51 in Scotland and 89 on the UK Singles Chart.