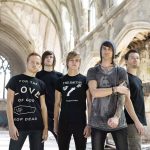 Hard Feelings is the sixth studio album by American metalcore band Blessthefall, released on March 23, 2018. It was released via Rise Records (their first album on that label), and is produced by Tyler Smyth, Matt Good and Howard Benson. In January 2018, the ensemble published a music video for “Melodramatic”, with a video for “Wishful Sinking” broadcast the month following.

More Albums From This label:
Rise