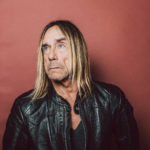 Free is the eighteenth studio album by American rock singer Iggy Pop, released by Caroline International and Loma Vista Recordings on September 6, 2019. It features contributions from Noveller and Leron Thomas, and the title track was released along with the album announcement. A music video for the album’s second single, “James Bond”, was released on August 14, 2019.