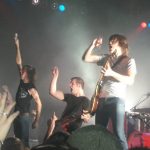 Erase Me is the eighth album by American rock band Underoath. It is their first album in eight years following Ø (2010), marking the longest gap between two studio albums in the band’s career, and their first one with founding drummer and clean vocalist Aaron Gillespie since Lost in the Sound of Separation (2008). It was recorded in mid-2017 with Matt Squire and mixed by Ken Andrews. The album was released via Fearless Records on April 6, 2018.

More Albums From This label:
Fearless