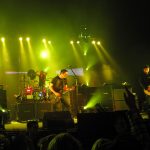 Ember is the sixth studio album by American rock band Breaking Benjamin, produced by lead singer and guitarist Benjamin Burnley. It was released on April 13, 2018. The first single, “Red Cold River”, was released on January 5, 2018. Four additional songs were released prior to the album’s release, including “Feed the Wolf”, “Blood”, “Psycho”, and “Save Yourself”. A music video for “Torn in Two” was released on the same day as the album.

More Albums From This label:
Hollywood