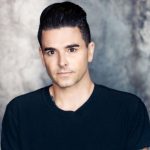 In an interview with MTV News on October 6, 2017, Chris Carrabba announced that Dashboard Confessional’s seventh studio album was in the works. On November 15, it was announced that the group’s next album, Crooked Shadows, would be released on February 9, 2018, through Fueled by Ramen. On January 19, 2018, the band released the song “Heart Beat Here” from Crooked Shadows.

More Albums From This label:
Fueled by Ramen

Fix Yourself, Not the World