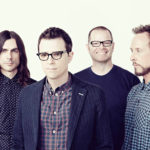 Weezer, also known as the Black Album, is the thirteenth studio (and sixth self-titled) album by American rock band Weezer. Produced by Dave Sitek, it was released on March 1, 2019, through Crush Music and Atlantic Records.

At the aggregating website Metacritic, the album has received a normalized rating of 53, based on 19 critical reviews, indicating “mixed or average” reviews. Robert Oliver at Drowned in Sound stated “This is a unique addition to Weezer’s discography that sees them preparing for the future, however bleak and overwhelming it might seem.” In a negative review, Corey van den Hoogenband at Exclaim! stated “Weezer’s latest is an utterly skippable collection that’d be entirely unremarkable if not for the fact it was released by Weezer.”  Linday Teske from Consequence of Sound noted that while the album is “not completely void of redeeming qualities”, has opined “While it is absolutely no crime for a band to flirt with sonic experimentation, a disastrous affair can brew when the flirtation results in a body of work that is far more two-dimensional and hollow than what the band have proven capable of doing through their decades of previous work.” Aaron Mook of Chorus.fm reacted positively, writing, “The Black Album feels surprisingly genuine for the aging pop-rockers, brimming with new sounds, bold production choices from TV on the Radio’s Dave Sitek, and most importantly, honest reflection on how the world has turned and left the band following their return to relevancy.”