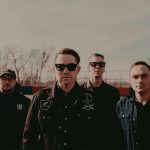 Hawthorne Heights have announced the upcoming release of Bad Frequencies, their first full-length album since 2013 and first release on Pure Noise Records.

Singer and Guitarist JT Woodruff shares “We wrote Bad Frequencies over the course of a year, which was our longest writing process as a band. We played 170 shows in 2017, wrote every moment that we could, then demoed, then recorded an album. I think we fit everything we possibly could in 365 days, and we are very proud of that.”

Along with the news of the upcoming album and label signing, Hawthorne Heights have released “Pink Hearts” the first single from Bad Frequencies. Listen to the song now below.

Woodruff shares, “If we try, we can stay young forever, but I’m not sure we actually want to. “Pink Hearts” is about burning through relationships, because you are selfishly just having fun when you are young. Eventually you have to wake up and grow up, and hope that you haven’t cut someone too deep.”

Bad Frequencies was produced by Hawthorne Heights along with Nick Ingram (Hotel Books, Capital House Studio), and mixed by Cameron Webb (Grammy Winner, NOFX, Social Distortion). The band previously worked with Ingram on the Hurt EP as well as Webb for “Push Me Away” which was released last summer ahead of their full run on the Vans Warped Tour.

from The Prelude Press