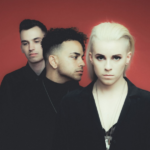 Hallucinations is the third extended play (EP) by American rock band Pvris. It was released October 25, 2019. The first single “Death of Me” was released July 12, 2019.

On April 9, 2019, Lynn Gunn posted a video on her Instagram featuring a few seconds of some previously unheard music, captioning the photo “She’s been quiet but she’s been WORKIN’ (and practicing her winking)”. [3] After the band had moved to Warner, Gunn stated that “everything is moving in a new direction.” She continued “the energy of their label and everybody who’s started to work with us is so great. It genuinely feels like a family. Very tight-knit. It’s a very different experience than what we’ve had in the past. Very pleasant from the get-go.”

Gunn stated in an interview with Rock Sound that writing begun for the EP at some point during 2016. Whenn discussing the tracks on the EP, she stated,

“Nightmare came together probably 3 years ago. I was in a hotel room and made the demo at my hotel and it’s kinda been an ongoing work in progress for the last 3 years and then finally once we started working with JT Daly, who did ”Death Of Me“ and ”Hallucinations,“ we started going through a lot of old demos and reworking them and that was one we picked out and it came out really cool. I’ve just always loved it, there’s a lot of hooks in it, it’s fun. I’d say it’s a much cheekier side of us but it’s still a little bit dark, like the lyrics are not necessarily creepy but still leaning dark. But the production is bright and fun. The visuals will have to be a nice balance of the two. It’ll be for the EP, but it might over to the [full length] record too. Old Wounds” was actually [written] around the same time I wrote “Nightmare,” same location as well. It was right before I moved to Brooklyn. Both of [the songs are] about the same situation with the same person and that one from the get go felt very special and I was waiting to find the right person to fully produce it and JT [Daly] smashed it. “Old Wounds” is a lot more classic, dark, brooding PVRIS. Both songs are very contrasting to each other, but we’re always doing things that are all over the place.”